Early buildings on the site were abandoned due to flooding, and the first Letton Court was built on higher ground. 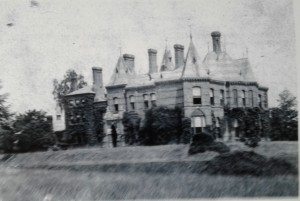 (May I point out dear reader, that although most photos on this site can be taken off for personal use only,   none of the images on this page belong to me and I would ask that if you wish to use them, you contact me so that I can ask permission from the gentleman concerned, Robert Millet Dew)

The first name that I have for Letton Court is John Kyrewood, followed by Captain William James Downes who was a JP and deputy lieutenant of Herefordshire, and then the Waring family.

Mr. Thomas Waring was one of the most respected farmers, although he never entered any of his stock into shows.  However his herd of Hereford cattle was much admired.  On his death in 1861, his glorious herd of Herefords plus sheep and other livestock were put up for sale.

The Blissett Family at Letton Court

The original building that was Letton Court was taken over by the Blissett family, headed by Joseph,  and in 1859 the Rev. Blissett  proceeded to completely rebuild the house.  He employed an architect from London, Mr. Thomas Teulon, and clerk of the works was Mr. J.H. Egon.

The work was extensive, and took nearly two years to complete, however the Rev Blissett was so pleased with what was being done that at Christmas in 1860 he presented the builders with a fine bullock.

The Court was built of red brick, very unusual for Herefordshire, and was rather lovely, hidden from view by ancient trees and with charming views.

Henry Blissett was a keen angler, and was chairman of the Wye Fishery Board, also taking part in an experiment to ascertain the growth rate of salmon.  In March 1875  his son John Freeman  Blisset, caught a salmon at Letton which weighed nine pounds, and  they tagged the fish with a silver label bearing “W” on one side and on the other “181”.  Later that year in September, a man at Ware on the river Severn caught an eighteen pound salmon and the tag proved that the fish had gained a considerable amount of weight.  However another fish tagged lost a good pound in weight in three weeks between the first capture and the second.

The coming of age of John Freeman Blisset

On 19th June 1866, the only son of Henry Blissett, John Freeman Blissett reached the age of 21 and many festivities were organised to mark the day.

It wasn’t the best day weatherwise, but the sun broke through in time for the sports, and the church bells pealed out happily to celebrate the day.

In the afternoon, the schoolchildren marched from the school room up to Letton Court, carrying flags and a banner saying “Long live the heir”;  once they arrived on the terrace, a little girl read an address to John, and then the whole school sang a song prepared for the occasion.  Afterwards they had plum pudding and wine, before exploring the gardens.

At lunchtime the tenants, along with workmen and labourers and their wives, sat down to a big lunch, after which they joined the children for the races – prizes for which included sweets and toys for the children, and implements of husbandry, braces and neckties for the men;  and drapery for the women.

John Blissett supervised the whole day himself, and in the evening a lavish ball took place in the gorgeous dining room of Letton Hall.  John rather sweetly opened the ball with Mrs. Dale, an old and loyal housekeeper and dancing started at ten in the evening.  Supper was provided, and every comfort was afforded to the guests.

John was showered with gifts, including  a lovely diamond ring and a set of gold studs set with diamonds presented by the servants of the household and a silver tankard given by the gentlemen farmers of the parish.

Henry resigned his position as Chairman of the Wye Fishery Board in 1877, saying that he regretted that the Secretary of State did not think fit to approve the measures without which he felt the salmon fisheries of the Wye, whether commercial or angling, would gain the prosperity of which they were capable.

In 1904 The Rev. George Blissett, M.A., the last surviving member of the family of Joseph Blissett, died at the age of 87.  He was educated at Balliol College, Oxford and was ordained in 1844.

Tom Millett Dew was born in 1859  at Beckington, and died in 1931 aged 72.  He was the eldest son of Joseph Carter Dew, of Milton Hill Wiltshire, his mother being Catherine Mary.

In 1889 Tom married Margaret Jane Blissett  and they took over Letton Court when Henry Blissett died in 1893.  Sadly, their children died at an early age and were buried in the church next to Letton Court,  as was Margaret when she died in 1901.  Tom eventually married again, his wife being a Miss Sysum from Wiltshire.

Tom sat as a Magistrate for Herefordshire for a good many years, and was also on the Rural District Council;  he was a philanthropist who championed the welfare of Hereford Hospital.

When Tom died, he was buried in the church adjoining Letton Court, in the same grave as his first wife Margaret – perhaps he never truly got over losing her. 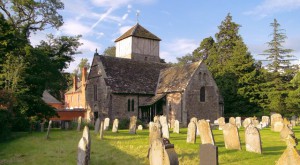 I am indebted to  Robert Millet Dew,  who has sent to me a photo of Tom Millett Dew,  his Great Uncle – he has pointed out the abundance of oak paneling  behind his Great Uncle, and one can imagine how quickly that would have ignited in the fire described below.  This same gentleman has kindly supplied some of the information regarding Tom Millett Dew and all of the images relating to Letton Court. Robert tells me that Tom had a pencil drawing made of the above photo, and it hung in both the old and new Letton Courts.    Jack Russells are very dear and loyal little dogs, and Tom was clearly extremely fond of his.

Unfortunately, in 1924 Letton Court was burnt to the ground when a workman using a blow torch to remove paint from a window frame accidentally set fire to the curtains…….a stiff breeze fanned the blaze and within two hours the house and all its contents apart from some silver, estate papers and wine which were stored in strong rooms,  were gone despite the best attempts of the household staff to contain the blaze until the fire brigade arrived.  At the time, all the men were away at the market, and we will never know whether if they had been at hand the house could have been saved.

The brave staff who tried to save Letton Court 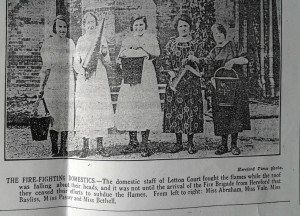 The ruined interior of Letton Court 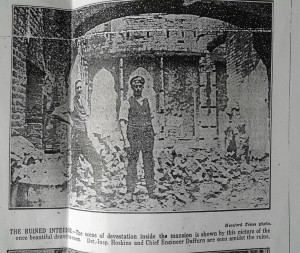 and the ruined exterior of Letton Court 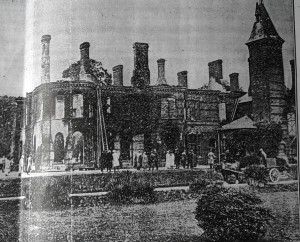 This photo shows all that remains of the old Letton court – the red brick outbuildings to the right of the church.  At the time, not many houses were in Herefordshire were built using this material. 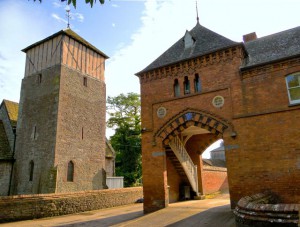 The current Letton Court was built close by, and is a lovely house with an old moat and the original gardens and parkland. 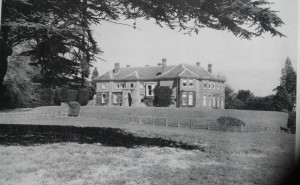 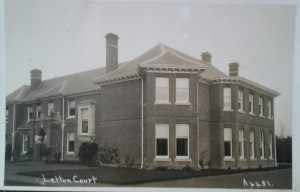 The house was put up for sale in 2012 and is now, like so many large country houses, a popular venue for parties and events.