Lugwardine Court was originally known as Rockfield House, and was built in the latter half of the 18th century but was pretty much rebuilt in 1810 by the Rev. J. Freeman. It sat on a hill and has glorious views of the surrounding countryside. 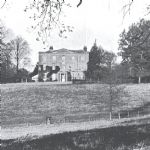 These days, the glorious surrounding parkland and gardens have been lost to modern houses and the site of the building itself is a school.
In 1824 the house, still known as Rockfield House, was offered for let by the Freemans, and was described as a substantial mansion with stabling of offices of every description for the accommodation of a large family.
There were two walled gardens, well stocked with fruit trees, lawns and shrubberies, as well as two orchards.
The accommodation included entrance hall; drawing room; dining room; breakfast parlour; butler’s and other pantries, servants hall; kitchen; Brewhouse; dairy. There were eleven bedrooms, two dressing rooms, water and other closets.
Outside was a good coach house with granary over; two three stalled stables; a cider mill; two barns and other outbuildings.
A good point was the fact that coaches passed daily from Hereford, through Worcester to London.

The Freeman family returned to Rockfield House and remained in residence for many years.
John Gardiner Freeman was the Chairman to the Board of Guardians of the Hereford Union, and was evidently well respected in the community. In 1855 he was presented with an elegant candelabrum and epergne combined, wrought in massive silver and standing around two and a half feet high. The base was a tripod, the claws of which were ornamented with leaves of acanthus, and from which sprang a triangular shaped obelisk presenting three shields.The first shield was inscribed
“presented to John Gardiner Freeman Esq. by the Guardians and Ratepayers of the Hereford Union, in testimony of their respect and esteem for his private worth and his valuable services as Chairman of the Board of Guardians for a period of nine years and upwards. Hereford, May 1855”
The second escutcheon was engraved with the armorial bearings of Mr. Freeman, and on the third, his initials. From the centre of these rose two entwined vine branches, surrounded by the tendrils of the hop. Five shoots, laden with fruit, stretched out from the centre of the vine and terminated in five elegant candelabra. The parent stem continued upwards with the foliage spreading out in a crown supporting a glass vase.

The Crofts at Lugwardine Court

Sir Herbert Croft bought Rockfield House from the Freeman family, and in 1866 decided to rename it Lugwardine Court, due to there being another Rockfield House near Monmouth which was causing confusion.
The Croft family are better known for their bigger and grander residence…….Croft Castle.