Sarnesfield Court was a lovely building, constructed over time by improving and enlarging earlier houses on the site;  it was demolished in 1955/77 and a new house was erected in its place using the lovely stable block.  The beautiful grounds and some of the walled garden still remain. 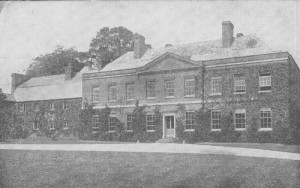 This picture of the original Sarnesfield Court has been kindly supplied by  the lovely and invaluable site http://www.lostheritage.org.uk/ to be found here.  Do take a look – without sites like this, images of our glorious old buildings may become very scarce indeed.

As will be seen, many notable families lived at Sarnesfield Court and it is a shame that a place with such an illustrious history could not be saved.

When the Domesday survey was carried out, Sarnesfield was owned by Roger de Laci (Lacey), and eventually passed by the co-heiress of Sir Nicholas de Sarnesfield to the Monington family where it remained for a great many years.  It is thought that the name Monington came from the parish of Monnington on Wye in Herefordshire, and the men were prominent members of society, being M.P.s, Mayors and Magistrates.

The male Monington line died out, and Ann Teresa Monington gave the Sarnesfield estate to John Webb Weston who in 1829 assumed the Monington name by Royal Licence, but he died without having any children and the estate was handed to the children of his sister Anna Maria, wife of William Thomas Salvin of Croxdale, Durham.

The children of this pair went on to sell the estate to William Worsley Worswick in 1878, and he then sold it on in 1891 to George William Marshall.  George’s great grandson inherited the estate, and currently lives in the house built on the site of the old court.

Marmaduke Charles Salvin was a member of one of the oldest Durham families, and was a descendant of Lord de Rooss.  He was educated at St. Cuthbert’s College, Ushaw and in 1845 married Caroline, the daughter of Sir Charles Wolsely.  Sadly Caroline died some five years before Charles, but they had many children together.

Not only did Marmaduke have estates in Durham, he also had properties in Herefordshire, including Sarnesfield Court.  He died at Burn Hall, Durham, just after Christmas in 1885.

Sarnesfield Court was purchased by George William Marshall in 1891 – he was born near Birmingham in 1839 and was the only child of a Birmingham Banker, George Marshall.  His early education was private, followed by going to St. Peter’s College Radley and thence to Magdalen College, Cambridge.  Eventually he moved to Peterhouse and graduated in 1861, before being called to the bar.

George was appointed Rouge Croix Pursuivant of Arms in 1887, and he was a lifelong enthusiast of all things genealogical and was a stickler for accuracy.  At Sarnesfield Court he amassed a huge genealogical and heraldic library, as well as a collection of armorial china and was a founder member of the Parish Records Society..  He was fortunate enough to receive  an inheritance from his godfather and this enabled him to buy the Sarnesfield estate

In 1902 he became High Sheriff of Herefordshire, and was also a J.P. and D.L as well as a Freemason.

He owned a house in London, and it was there that he died in September 1905 but he was buried at Sarnesfield along with his tabard as York Herald.