All Saints Church at Monkland dates from around 1100, and was built on the site of a Benedictine Abbey.  It was restored in the 19th century.

The church at Monkland had fallen into a ruinous and dilapidated condition, and was restored in 1865;  the architect being Mr. G.E. Street of London.

The chancel was rebuilt at the cost of the vicar, the Rev. Sir Henry Baker, Bart., and the nave and other parts of the church were funded by parishioners and friends.

An excellent organ was built by Mr. J.W. Walker of London;  the instrument has a wonderfully soft yet powerful tone.

The new reredos and eastern window were much admired, but there was still much work to be done and fund raising was carried out throughout the remainder of the year 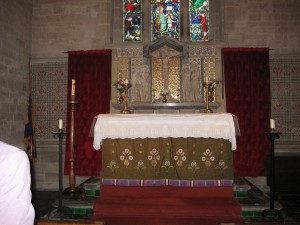