The interior of this church is stunning, especially the wood ceiling. The font in St. James the Great is circa 13th century, but has been extensively renovated Memorial to the parents of Humphrey Walwyn, who founded the Grocers School now know as The Elms, Colwall A lovely brass of 1590, commemorating Elizabeth Harford and her six sons and four daughters. Unfortunately, as with many of the altar images, the lighting made a good photograph difficult 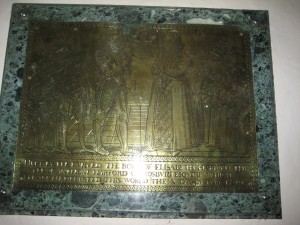