This church, like many in Herefordshire, is very close to the Manor of the village – in this case,  Whitbourne Court.
The church is Norman in origin but was extensively restored in Victorian times.
In 1864 the work of restoration and enlargement began as the funds had successfully been raised.
The western gallery of the church was to be removed, and a new north aisle was to be added, sufficient to accommodate 100 people.  Also a new vestry was to be built, and new open seats furnished for the nave, and new stalls for the chancel. The listed Lychgate shown on the picture of the church is a lovely 15th/16th century (although restored in 1911) example of where traditionally the first part of the burial ceremony was carried out, and the original bier is still stored under the rafters. The sandstone tiled roof provided protection from the elements and to this day the coffin shelters under the lychgate before being taken into the church for the service. 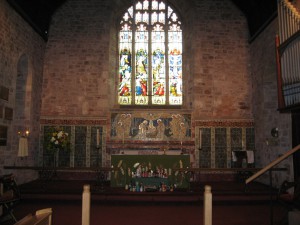 The tower of Whitbourne church houses six 18th century bells and also a 16th century sanctus bell. In 1912 the Harington family and some of their friends installed the screen behind the altar (reredos) and it is truly beautiful – depicting the Nativity, it also features colourful wings in the style of William Morris.
During the Second World War, several boys from Westminster school were evacuated to Whitbourne, and many of them have donated generously to the church.

Norman, and truly beautiful in its simplicity.  The carving is of interlocking stars. This is one of many plaques for the Freeman family, including Johanne, Abigail, John, Mary, Elizabeth, Anna, John