The oldest part of this church is the tower which is roughly circa 1200. Originally it was detached from the body of the church, and was used as a refuge for the parishioners during troubled times – the walls are a very solid and reassuring six feet thick.

Under the terms of the will of Lady Margaret Hawkins, Lady of the Bedchamber to Queen Elizabeth l and second wife of Sir John Hawkins, the Elizabethan sailor and adventurer, and also a Vaughan from Hergest Court, it was decreed that pupils of the nearby free school (Lady Hawkins School) should attend the church every Sunday, and then on the following day give an account of what they had learnt. This is a simple Norman font, near to which is a baptismal “tank” which was frequently used for adults in the eighteenth century. An extravagant alabaster tomb for Thomas Vaughan of Hergest Court, who was killed at the battle of Banbury in 1469. His body was returned to Kington, and he now lies with his wife Ellen Gethin, or Ellen the Terrible!!

In 1845 the Hon. Miss Harley directed Mr. B. Jennings, a sculptor of Hereford, to restore the tomb which had fallen into disrepair, and also to erect strong iron railings around the tomb. In the aisle opposite this place are deposited the remains of Philip Turner, late of Scutt Mill, and Rebecca his wife. She died 12th October 1762 aged 23 and he died 14th December 1798 aged 64 Lovely brass plaque in memory of Albert, 4th son of Francis and Jane Parker, born 18 March 1853, who with 78 others was lost in the ship “British Admiral” in Bass Straight on 23 May 1874 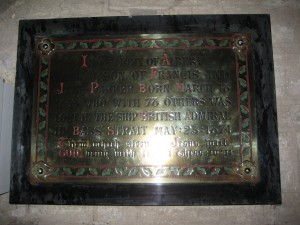 Other Memorials include one for Cassandra Davies, a spinster of the parish who decreed that five pounds was to be distributed every year on 26th March to the “most antient, indigent, and necessitous parishioners”. Another inscription relates how Richard Meredith in 1777 left £24 per year to be given “in bread monthly and distributed amongst the poor housekeepers who were not suppoted by the Parish as paupers, on the first Sunday of every month”.