Parts of this little church are dated around 1170, but there were later additions such as the tower in the early 13th century and the porch and vestry much later. This font is modern. Peggy Burwall, youngest daughter of Edward and Milborough Burwall died 3rd February 1835 aged 76. (There are many other Burwall memorials, tracing the family from Thomas and Ann who both died in 1699 through to the youngest and last, Peggy). Peggy’s stone was erected by her nieces, Milborough Burnam Patgeshall, and Frances Elizabeth Dansey. There are several very interesting effigies which are believed to relate to the Zeddefens and their family, the oldest being a man and his wife which is dated around 1290 – his head rests on cushions and he carries on his left arm a shield bearing the arms of Zeddefen.
There is also a Knight with his two wives which is of a slightly later date and his shield is small. He has a lion at his feet, whilst the woman on his left has her feet on a dog.
A 14th century effigy depicts a small female, maybe a child – effigies this small are uncommon.

The first person to be carried on this bier was Eddie Powell of Pound Farm, and the last person was Mr. Leonard Powell in 1989. The original bier was extremely heavy being made of solid oak, and as it was designed to be carried rather than wheeled it must have been very difficult for those who had the task of carrying both coffin and bier through the village. The funds were raised and at the cost of £250 the new wheeled bier was purchased. 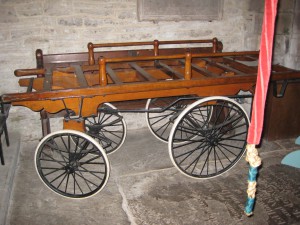