Leominster had at least two prisons in the past.

Little remains of the original building, but part of one wall can still be seen, along with what was either a door or window, although this is now bricked up. The lower courses of masonry are the original stonework. 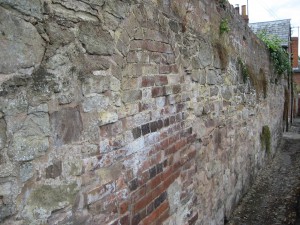 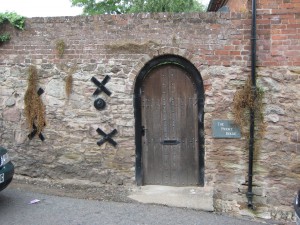 This prison is thought to have been two storeys high and in its time housed several historic names; including in 1402 Edward Mortimer of Wigmore and later, Owen Tudor who was Henry VIII great grandfather. These and other unfortunate prisoners, were taken without trial from the prison and executed at the nearby Iron Cross. By the mid eighteenth century the prison could no longer cope with the number of potential inmates and plans were afoot to extend the building. Some ten years later however, it was decided that a new prison entirely should be built and this one was demolished in 1753

New Street Prison, Leominster, was built in 1750 to accommodate more prisoners than Forbury but when the Borough Police Force was disbanded in 1888 the prison was no longer used and was rented to a Rifle Volunteer Company.