The church is huge for the size of the village population, and just outside the main door is a famous yew tree which is estimated to be at least 1200 years old. Unfortunately it is now slightly worse for wear, which is not surprising given it’s age and the fact that visitors cannot resist sitting inside it. Within the church is the tomb of Blanche Mortimer b. c. 1316, the youngest daughter of notorious Sir Roger who ousted King Edward 11 and ruled England for three years.

During 2013, restoration work began on this tomb, and workers were amazed to discover a lead lined coffin within the tomb within which are believed to be the remains of Blanche. If this is indeed the case then it is most unusual as bodies were buried in the ground beneath the tombs normally.

Blanche’s likeness is carved out of Painswick limestone, and her delicate hands cradle a rosary whilst she wears a loose fitting gown and headdress.

Although the coffin has undergone endoscopic examination, it will never be opened due to the Church of England policy of not interfering with human remains – a policy with which I wholeheartedly agree. The Grandison tomb, exquisite European Renaissance carving, but sadly damaged by damp and even more sadly, by vandalism 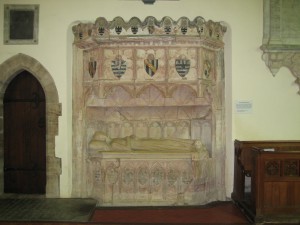 Walter de Helyon was part of a noble family who owned  the Manor in the village of Much Marcle, now know as Hellens.

He died in the mid 14th century, and this effigy is gloriously colourful, being made of painted oak.  The paint was restored in 1971 due to damage by damp.