In the sixteenth century, after the Dissolution of the Monasteries, the Manor of Nether Frome was purchased by Richard Harford of Bosbury, (later Sir Richard, described as a “Usurer” in parliament) and when he died, his widow Martha leased it to Michael Hopton from Ludlow whom she eventually married, and they built what was known then as the Strong House, a moated building, which event saw the beginning of some 300 years of Hopton ownership of the site. Michael Hopton himself died on 1st April 1668. 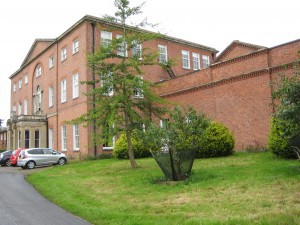 In 1645, during the Civil War, the house came under siege by Cromwell’s Scottish army, and the residents had no choice but to demolish the medieval church in order to build defences.

The Hoptons at Canon Frome Court

After the war, the Royalist Sir Edward Hopton and his wife Deborah returned to what was left of the house and church. The church was eventually rebuilt in around 1680 (unusually for the time, in brick) but the only part of this second church that now remains is the tower, with the current church having been built by the Rev. John Hopton in about 1860 in memory of his wife and three of his daughters. He was the eighth generation of the Hopton family to live at Canon Frome Court, which was rebuilt in the eighteenth century. The Rev. John Hopton was actually John Parsons by birth, but his father had been willed the arms and name of Hopton in 1841, as well as the estate. He had 13 children, of which six had died by 1859.
Dating from around 1786 the present Canon Frome Court was built for Richard Cope Hopton and remained in the family until being bought by the Herefordshire County Council in 1952, who turned it into a school for 13-15 year olds. In 1978 the school was closed, and the Court once again changed hands. It is currently an intentional community, which is approached via a long driveway at the end of which are two large brick pillars dated 1905 (the ornate iron gates can still be seen but these days they are never closed). On top of these are two carvings – one of a Griffin’s head with a severed hand in its mouth, and the other of a chained Talbot hound, resting a paw on St. Andrews Cross. Both of these appear on the Hopton family crest. 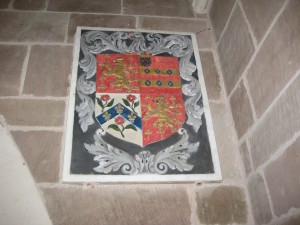 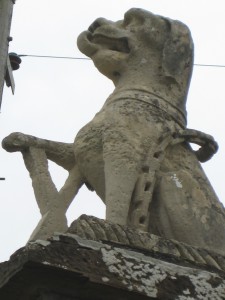 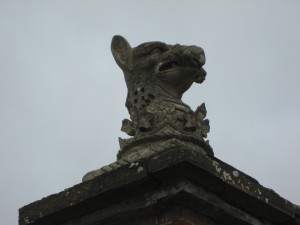 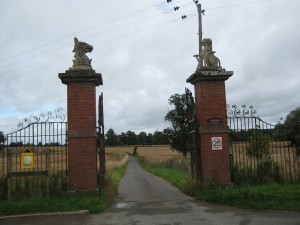 In 1829, it was reported that Richard Hopton, the second son of the Rev. J. Hopton, was a somnambulist and on this unfortunate occasion he managed to sleepwalk out of one of his bedroom windows and fell to the ground. Initial hysterical reports suggested that he was dead, but this was not the case. One of the servants heard him fall, and medical help was duly summoned – his worst injury was a broken collar bone, but he was rather badly bruised all over and probably was in an extreme state of shock having been so rudely awoken! However, a few years later in 1835, Richard suffered a burst blood vessel and died.

John Dutton Hunt Hopton was the only son of Captain John Dutton of Farnshill Park, Radnor, and when in 1899 he married Sybil Maude, the eldest daughter of Walter Mynors Baskerville of Clyro Court and granddaughter of John Hopton of Canon Frome, he was granted the name Hopton by Royal Licence.

He was by all accounts a very tall gentleman and was not only an excellent shot (shooting in the 1908 London Olympics) he was also a noted musician, being a Director of the Royal Academy of Music and a composer of many waltzes and songs. To further his love of playing the organ, he built a music room at the Court and commissioned an organ to be made by Jardines, who had also built the organs for the Cathedrals of Hereford, Worcester and Gloucester.

John Dutton Hunt Hopton was the founder of the Army Rifle Association, Captain of the Army Eight, and Commandant of the first British Rifle team to visit Australia.  He was also Commandant of the School of Musketry, Hythe, and Chief Inspector of small arms.  On his own rifle range he did a great deal of experimental work with new ammunition.

Colonel Hopton of Canon Frome Court died on 6th June in 1934.  He had shot at Bisley for England on 36 occasions and in his Will he stated that we wished to be buried close to the 1500 yard firing point on the range at Canon Frome, regardless of whether the ground had been consecrated.

He hinted strongly that it would be a jolly good show if the Bishop did consecrate the patch, and indeed the Bishop of Hereford duly obliged as well as conducting the funeral service.

A hymn was sung, set to music by the Colonel who was an accomplished musician.

Later, a lovely white mausoleum was erected over his grave and it could be seen from a great distance as it was on the summit of a hill.

1940 – Sybil Maude Hopton, the wife of Colonel Hopton, died July 3rd 1940 and left instructions in her Will to be buried beside her husband on the rifle range.

The Hoptons down the years

Will of John Hopton

Valued at £50,871 8s 9d proved by the Executors Colonel Edward Hopton and the Rev. Michael Hopton, to each of whom the testator bequeaths the sum of £200. To his nieces Gwendoline, Winifred and Mauda, daughters of the testators late brother Charles, £100 each, and to his foreman, butler and coachman, £100 each. The testator devises his real estate in the counties of Gloucestershire and Worcester to the same uses as the real estate settled on the marriage of his only child Bertha Maria, with Mr. Walter Thomas Mynors Baskerville; but the person entitled is always to bear the name and quarter the arms of Hopton. The residue of the late Mr. Hopton’s estate is left to his daughter, Mrs. Baskerville, for life, with power of appointment to her in favour of her children, or in default of appointment, for her two daughters Sybil and Dorothy
May 1893
Christie, Manson and Woods – auctioneers of repute – advertised the forthcoming sale of the late John Hopton’s cellar of wines, which included ports of the vintage 1858 and 1863, plus sherry and Madeira.
September 1897
W.T.M Baskerville of CFC and Clyro Court Radnorshire, died at his Radnorshire seat at the age of 58. The eldest son of the late Thomas Baskerville, a former MP for Herefordshire, who assumed the surname Baskerville in lieu of Mynors, the deceased was born in 1839 and educated at Eton and Christ Church, Oxford. In 1864 on the death of his father he took over the extensive estates in Herefordshire and Radnorshire

Whilst perusing the results of the Evesham Agricultural Show for this year as many prominent families took pride in breeding champion stock, I was rather stunned to discover that amongst the classes for pigs, horses, cattle etc., there were also those for people! They were clearly considered less important than “Roots and vegetables” as they came below these on the list, and were under the heading “Labourers and Domestic Servants” and entries were submitted by the employers. The Hoptons were no exception, and in fact one of their “entries” won second prize.
Classes were as follows:
Class l.
Labourers, or labourers’ widows who had brought up the largest family without parochial relief. First prize £2
Class 2.
Labourers or servants who had served the greatest number of years for the same master or mistress and who would receive a good character from their employers.
Class 3.
Labourers as above, under 40 years of age.
Class 4.
As above, but under 20 years of age.
Class 5
Female servants, as class 2.
Class 6
Female domestic servants above 20 years of age who have lived on the same premises for the longest period, or with the same master or mistress, at yearly wages of not more than £12 and shall receive a good character.
Class 7
Female domestic servants as above under 20 years of age.
Class 8
To the Shepherd who has reared the greatest number of lambs for the same master or mistress with the least loss of ewes, in proportion to the number of ewes put to the tup, the flock not to be less than 40.
Classes 9 and 10 also were for shepherds.
It was striking that in many cases, no second or third places were awarded so one wonders if this was because employers simply couldn’t be bothered , or whether there were not enough worthy entrants. Certainly the prize money for the winners in each category was not to be sniffed at, and the labourers and domestic servants would no doubt have been very glad of it.

1871, the family were at their other property, Kemerton Court in nearby Gloucestershire