The church at Marstow was originally called St. Martins, and was on a completely different site, down by the Garron Brook. However, the Garron Brook was prone to overflowing its banks and flooding the church, so in 1855 the old church was demolished and the present church dedicated to St. Matthew was built at Brelstone Green, Marstow.

The Consecration was in 1857 but due to an oversight all marriages up until May 1912 were not actually valid! Fortunately a hurried Act of Parliament put this right, so descendants of anyone married during this period can heave a sigh of relief. Incidentally, this was not the only church to have this problem – there were four others in England who did not have the authorisation to marry people. 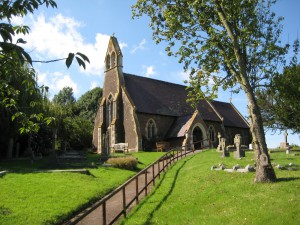 The alabaster carving of the Last Supper – rather gruesome in its own way, as the figure to the right of Christ is about to be stabbed.  It appears to be a woman. The lovely carved oak lid on this font was made in 1902 to commemorate the Coronation of King Edward 7th and Queen Alexandra.